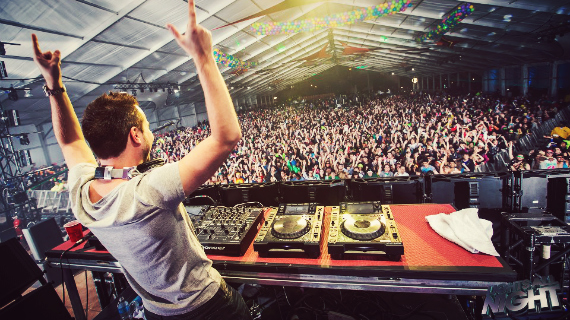 It’s FreakNight 2012 at WaMu Theatre in Seattle. Myself and Chris Herrera have just finished our exclusive interview with Armin van Buuren and now have the opportunity to speak with SANDER VAN DOORN. He enters the room expressing his fatigue and the desire to be brief and ends up talking with us for over 2 hours! Here are some highlights from that conversation with questions from myself and guest interviewer Chris Herrera.

We understand you’ve signed with Jay Z’s new label. How is that going to affect your producing?

First of all, it isn’t going to change what I’m doing. They signed me, because they like what I’m doing. The first track has been out for about half a year over Europe but now we’re ready for the US market. It’s the beginning of a very good collaboration so we’ll see what happens. 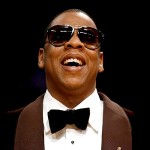 How did your collaboration begin? Was this something you reached out for?

It was certainly based on music. I had produced “Nothing Inside” with Mayaeni, who is a US artist and the ball started rolling when I released the track over in Europe. They (Jay-Z) picked it up and now we’re in talks of doing something more.

Do you think you might remix one of Jay Z’s vocals now?

Obviously, I’m into the whole dance music scene, but Jay Z is one of those Rap artists I really like because he has a different dimension. So yes, I would love to work with him.

Ah yes!! I was actually just over at Amsterdam Dance Event and we were talking about that plug. It really makes all the difference doesn’t it?

It does! We love your music, we’ve been a fan of yours for many years. Doorn Records has a special angle on that Techy Trance flavor. Who else in that realm are you liking right now?

Doorn Recs is all about crossing genres. It’s more about music I like to play out as a DJ. So it can by Techy, it can be Progressive, it can be Housey. We’ve signed some newer artists that don’t really go for a certain genre. Over the next few months we’ll be releasing some newer stuff that falls more in an experimental bracket. 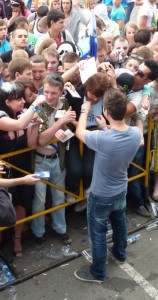 These days the type of DJ performances we’re seeing have become a bit more gimmicky and image driven with DJs jumping in the crowd or putting masks on their heads. Are you going to be sticking strictly to your music or do you want to add some newer elements at some point?

First of all, I’ve always been strictly to the music. I understand the whole concept of you buying a ticket and you’re there to see a DJ and he’s looking at the buttons and he’s doing his own thing. There is a show element that comes with that, but I strongly believe in building a set and creating a journey of sound for the fans to listen to. I’m not like Steve Aoki putting up an inflatable boat and going through the crowd. But I do love the whole concept! Throwing pies and stuff – It’s cool. Dada Life have their bananas and stuff. It does create a bit more of aesthetic view than just a DJ up there staring at the buttons. I’m really about the whole live concept – I always play on the CD players. We don’t like the sync button.

I personally do not like the whole laptop phenomenon – looking at a screen and stuff. You have to have an interaction with the crowd. I like to throw my headphones in the crowd after a set if it’s been a good set. It’s funny how we became like rock stars when we’re really just geeks on the decks. 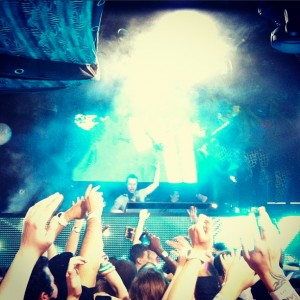 Do you think the sync button/laptop thing is going to take away from our music in the coming years?

No, it isn’t. Even if you don’t use the sync button, with the new CDJs is pretty easy to sync the tempo. It’s still about choosing the right records and playing them at the right moment and creating something for the crowd.

But beat matching and mixing is a skill. Do you think kids will lose that skill now that they don’t have to care about it anymore?

I think one thing we need to be careful of is that we don’t choose artists who are too young. Right now people are ok to go see some 16 year old DJ that could be playing his own school party. It doesn’t come across the right way. If he’s part of a line up that’s one thing. It features a new talent. But if I’m going to go to a club it’s going to be to see one of my favorite DJ’s. I wouldn’t want to listen to a 16 year old DJ.

Chris Herrera: If I can comment, as a US producer. I grew up following you boys across the pond. Then the US explosion happened recently, so the sound I grew up emulating has now given way to this more youthful EDM.

The thing is that – the hardest thing about being a DJ is how do you start, where do you go, and where do you end? You can say, “ok, let’s bang the ass out of it.” That’s easy. But it’s usually the sets, that actually stand out are the sets that don’t play all those obvious tracks. 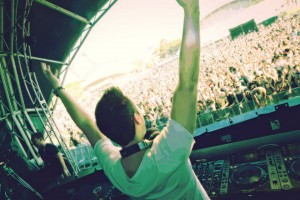 Also, there’s a pattern in music. Anytime something becomes commercial, everyone plunges into it and it gets ruined within a few years.

Exactly! It’s not like it going to be ruined forever. It’s gonna reach this point, where all of a sudden all these Amercan clubbers who are pretty new to the scene are gonna notice that, “hey, this DJ and this DJ and this DJ have played this track already”, and become a little more selective. You’re gonna end up with DJs who recognize that and you’ll have a new breed of DJs who will sound a little more underground and then it will rise again. That’s the whole progression of dance music.

I can see that.

Also, about the sync button. If you’re playing on a pair of CDJ 2000’s they tell you the BPM already. You just set one to match the other and it’s already synced! But what tracks are you playing? How are you going to follow up this DJ? Are you playing the Beatport Top 10?

Do you usually listen to the DJ before you?

Well, having my own label you get a lot of promos. It’s kind of like looking into the future. It’s pretty easy to see where the sound is going. It’s easy to use the popular tracks, but it’s a challenge to not use those tracks!!

Right! God bless you Sander, you’re so on point!

Haha, thanks. Years ago you’d go to the record store, and it wasn’t about pulling the Top 10 of the wall. It was about making friends with the guys selling the records.

There’s only 2 of these in right now but I’ll sell you one bro….

Right! Then pulling off the label of the record so other guys don’t know what you’re actually playing. And obviously when you’re 16 years old you don’t know that principle, but, you know it’s a progression!