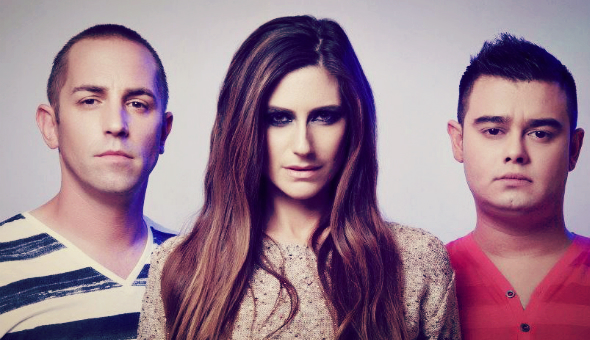 You’ve waited patiently since it debuted onTrance Around The World 400 in November 2011 and watched it trend worldwide during A State of Trance 573. Now Velvetine’s track ‘The Great Divide’ is finally set to release on September 3 on Anjunabeats.

For those unaware, Velvetine is the EDM group that consists of DJ/production duo Myon & Shane54 and American singer-songwriter Aruna. The three made the decision to form the Velvetine project after collaborating in 2009 on ‘Helpless ‘ because they had ideas for tracks that didn’t exactly fit into the Myon & Shane54 clubby vibe and the trance vocals Aruna had been associated with.

“We wanted a musical outlet free from the confines and impositions of typical club music, a place we could really pour all our musical training into and take more risks,” says Aruna.

Velvetine’s first official track “Safe” was released in August 2009 on Anjunabeats Volume 7. Immediately intrigued by the familiar vocals and progressive, ethereal sound, fans were thrilled to find out that three of their favorite artists had formed an offshoot EDM group. Armin van Buuren liked the song so much that he created an intro mix for it as well as a mashup of ‘Safe’ with his own track ‘Face To Face.’

Besides taking elements from trance and progressive music, Velvetine’s influences are all over the board, deriving from classical musicians like Chopin and Debussy, jazz-fusion artists The Yellowjackets and Pat Metheny, film scoring legend Thomas Newman, downtempo greats Late Night Alumni and Ulrich Schnauss and even pop music.

“The Velvetine sound is the place where all three of our tastes overlap,” says Shane.

The story behind ‘The Great Divide’ was heavily inspired by Academy Award-winning composer Thomas Newman’sscore to the 2008 film Revolutionary Road. After falling in love with the melody and chords and the unexpected piano and string arrangement, Velvetine decided to attempt to translate Newman’s composition into a dance track. After a lot of trial and error–and almost two years of revising and reworking–the end result speaks for itself.

“Thomas Newman was one of the main influences in the direction we’re taking Velvetine,” says Myon. “‘The Great Divide’ is a project where we mixed live instruments into the electronic sound. Since we are using guitars, pianos or strings–or doing some experimental sound designing–a track can take years to finish.”

Between their own individual music careers, touring and making time for studio sessions (not to mention being located in completely different parts of the world), Myon, Shane54 and Aruna have had to dig deep to find extra time to work on the Velvetine project. But through patience and persistence, Velvetine has been able to make serious strides musically. They’ve performed together at gigs in Taipei, Vancouver and Buenos Aires and most recently sold out Exchange Los Angeles.

By honing their live show, producing timeless tracks and growing a fan base eager to hear more, Velvetine has provided Aruna and Myon & Shane54 with a lasting musical outlet that will only refine with time.

“We can only hope the EDM world is ready for it,” says Aruna.

CONTEST ALERT:
Want to show off your graphic design skills? To celebrate the release of “The Great Divide,” Velvetine and Anjunabeats are giving fans the chance to design their official logo!

Submit your entries through Velvetine’s Facebook page (facebook.com/velvetinemusic) by posting your design on their Timeline or via Message. The deadline to enter is September 7 and one first place winner will be chosen on September 24. You may submit more than one design and designs must be original and contain no copyrighted material.