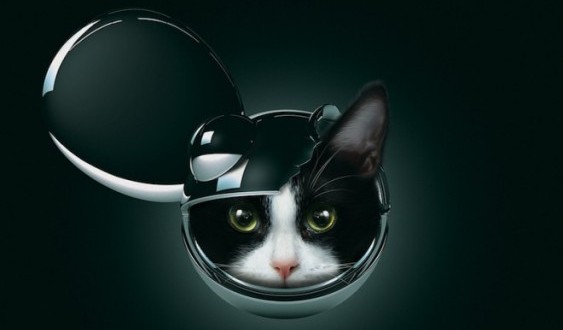 The world of deadmau5—the world-renowned electronic artist—is always fast and furious. He recently overhauled his studio in hisTorontohometown and following his full-scaleEuropean tour this past spring, he locked himself in and went on a creative spree to finish > album title goes here <, his new album due out September 25 (Ultra Music).

Following his performance with the Foo Fighters at the Grammy Awards earlier this year showcasing his stellar remix of the group’s “Rope,” deadmau5 continues his collaborations in the rock world by enlisting the vocal talents of Gerard Way, lead singer of My Chemical Romance for his new single “Professional Griefers.” Out on August 14 on Ultra Music in North America, the single sits on the tougher end of deadmau5’s productions and already leading rock stations such as Los Angeles’ KROQ, Live 105 in San Francisco, KNDD in Seattle and SiriusXM’s Alt Nation have been lending early support.

Fans first got to experience “Professional Griefers” as an unreleased instrumental track during deadmau5’s North American Meowingtons Hax tour last year, premiering the track at his critically acclaimed headlining performance at Lollapalooza. Now “Professional Griefers”–which kicks off with stomping beats and heavily distorted guitar stabs, then builds tension with discordant synth strikes leading into the chorus–features vocals from one of the most distinctive voices in rock. Look for its accompanying video, featuring both deadmau5 and Gerard Way and created by Dave Stewart’s Weapons of Mass Entertainment production company, to emerge this month (exact date TBA).

All the tracks on > album title goes here < are deadmau5 original productions. They include collaborations with “Animal Rights” co-producer Wolfgang Gartner (“Channel 42”); vocalists Imogen Heap (“Telemiscommunications”) and Chris James (“The Veldt,” the critically acclaimed track inspired by the Ray Bradbury short story); and legendary hip-hop outfit Cypress Hill (“Failbait”). There are also new pieces like the Close Encounters of the Third Kind classic film-inspired “Closer,” the dance floor burner “There might be coffee” and electronica piece “Sleepless.” Like “Fn Pig” and “October,” many of these tracks have been available on deadmau5’sSoundCloud as rough edits. For > album title goes here < they come together as finished songs in the format the way he intends them to be heardby his fans.

The complete track listing for deadmau5’s > album title goes here < is:
deadmau5 just headlined the VELD Music Festival in Toronto this past weekend. His next North American major performance is confirmed for Saturday, September 22 in Las Vegas for the iHeartRadio Music Festival.