Taha Asadi (aka Tasadi) first began his EDM career in the late 90’s as a Dallas local artist. After a few years of residencies at several of the local hot spots, and selling CD mixes from the trunk of his car, he began working towards his true dream of becoming a trance and progressive music producer. He spent two years learning and honing his craft to perfection and had his first release on Armada Music’s Cloud 9 record label. His track, “Saturn” quickly became an immense fan favorite and was the catalyst that brought Tasadi’s career into full motion.

After a few years producing and remixing several other singles for various high tier EDM labels, Tasadi decided it was time to bring all his creativity and passion into one single entity… a full length artist album. In 2007, Tasadi brought “The System” to one of the largest and most prestigious Trance labels in the world, Lost Language. After the label executives reviewed his work, Tasadi was signed to Lost Language as an artist and A&R and granted several new opportunities to work with artists such as Gareth Emery, Andy Moor and Solarstone. “The System” was released in 2009 and featured heavily supported singles such as “Luna”, “Mercurious” and his massive hit, “Jupiter”. The album was highly supported by DJ’s from the likes of Above & Beyond, Armin Van Buuren, Markus Schulz, Gareth Emery and long time front runner, Tiesto.

Following the success of “The System” and the remixed album, “The System: Rebooted”, Tasadi turned his sights on becoming a highly acclaimed radio host. His show, “World of Illusions” debuted in November of 2009 on the #1 Trance and Progressive radio station, Afterhours.FM. His show quickly spread to thousands of listeners all over the world, adding new depth and diversity to his sky rocketing career.

Tasadi had no intentions of slowing down. Over the next few years, he mixed several compilations for Lost Language, including the illustrious double CD release, Exhibition: Centuries. This compilation featured remixes of tracks from Armin Van Buuren and Tiesto from some of the biggest names of EDM in 2010. Tasadi also teamed up with Japanese composer and producer Nhato to create their masterpiece, “Time Ticks Away”. This track was quickly signed to Spinnin’ and spread like wildfire, earning support from lots of top DJ’s and a top 10 spot on Beatport.

In 2013, Tasadi decided it was time to try something new. He teamed up with friend and coproducer Geoffrey Rhoads (aka Aryas Van Tassel) and together they brought “Lost Garden” into fruition. The duo signed on Faruk Sabanci to create the Dirty Rock remix and once the package was complete, it was released and received by thousands of anxious listeners. The track was featured on one of the main stages of ASOT 600, Armin’s BBC 1 Essential Mix, Corstens Countdown and an appearance on Andrew Rayel’s compilation, “Mystery of Aether”. It was also heavily supported by Armin Van Buuren on his “Intense” tour.

After several years of success and recognition, Tasadi finally decided it was time to begin working on a brand new album. In March of 2013, he began working on “Ancient Realms”. Fueled by the wonder and curiosity of mythical places, he brought seem of the most imaginative ideas into beautiful melodic pieces. Tasadi enlisted the aid of world renown vocalists to lend their talents to the project as well, including Madelin Zero, and 2012 “Trance Track of the Year” winner Christina Novelli. The album was recently signed to Lunary Records (Label of longtime trance master Phynn).

Over the past 14 years, Tasadi’s name has become synonomous with great EDM music. As a DJ, he’s opened for Paul Oakenfold, Andy Moor, Markus Schulz, Armin Van Buuren, Sander Van Doorn, John O’Callaghan and Avicii. He has been supported by some of the most famous names in trance music: Armin Van Buuren, Tiesto, Ferry Corsten, Markus Schulz, Solarstone and Paul Van Dyk just to name a few. His tracks have been spun on nearly every radio show, including Club Life, A State of Trance, Trance Around The World, Group Therapy and Global DJ Broadcast. 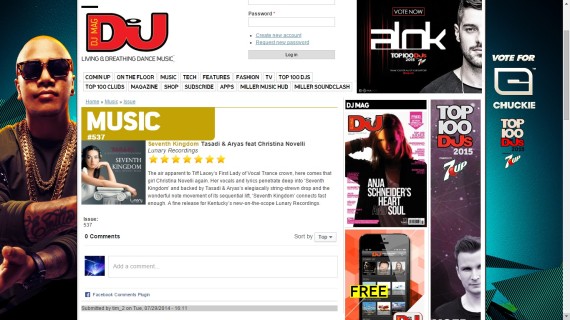