STAX was born in London and has been raised over the years in places like Oklahoma, Saudi Arabia, England and Louisiana. It is only fitting that he has been dubbed “Mr. International” for his massive worldwide appeal. With the release of his single ‘ALL YOU SEE’ Stax is continues to take the world by storm. “All You See” is an electro dance track that features the one and only FLAVA FLAV. It’s one of the many unique and fresh productions on the Electro Circus album. The Music video was filmed in Big Bear Lake in the Mohave Desert and in parts of Houston Texas will be featuring Flava Flav, Kristen Renton from ‘Sons of Anarchy’ Jessica Hall from the ‘Wilkinson Show’ and many more.

He started honing his craft and prepared himself for performing on stage by the age of five years old after he heard his first Michael Jackson cassette tape. Stax would spend day and night practicing the moon walk tirelessly singing and dancing until he passed out. Growing up all over the world, has given Staxthe opportunity to diversify and created an ability to incorporate unique sights and sounds into a truly one of a kind infusion of Electro, Hip-Hop, Pop, and R&B. It is no surprise that Stax’ music is able to appeal to almost everyone – with a fan base so wide in range that age, color and musical preference mean nothing. 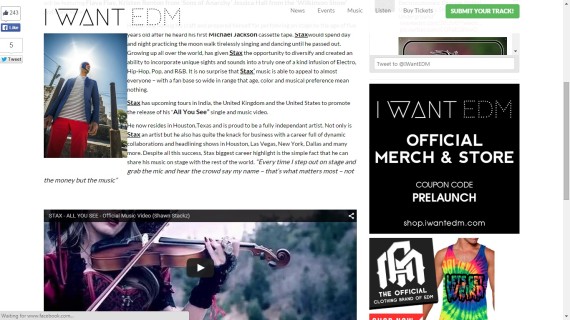