Leah Culver, previously known as MK Ultra, is a singer-songwriter/producer/DJ most known for her electro/hardstyle sound and powerhouse performances. Since her debut in 2011, her hard work and dedication to following her teenage dreams of becoming a respected female artist in a genre dominated by men, have made her a Atlanta’s hometown hero. Featured on Ultra Music Festival Radio alongside Porter Robinson, RUN DMT’s Kill Your Ego podcast, The Fresh New, Digitally Imported Radio, iHeart Radio, and Prototype Radio to name a few, she is quickly becoming a force to be reckoned with!

Leah wants her fans to know that the world is theirs for the taking and with hard work, dedication, and a positive attitude, you can make your dreams come true. She hopes to spend the rest of her life meeting people, traveling and making music. 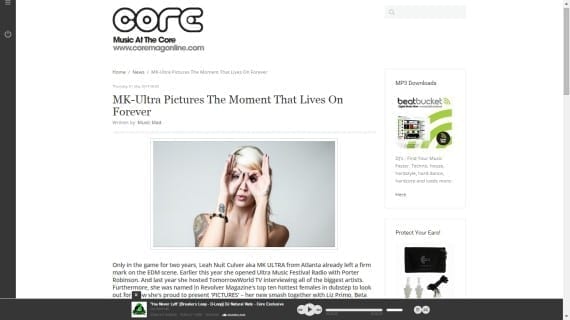