Donata was born December 18, 1986 in the small city of Mosonmagyarovar, Hungary to a middle class Lithuanian family. Due to her parents seperation, Donata was raised by her mother from age 7 on.

Donata began her official music career at the age of 16 when she entered a nationally televised Lithuanian talent show for unknown and undiscovered artists. In 2005, Donata was a participant at a popular TV reality show for singers where she reached the finals . After the reality show, Donata worked as a professional singer, songwriter, TV show presenter, event and TV show organizer in Lithuania.

In 2008, she released her debut pop music album in Lithuanian, and from then on, she participated in many international singer/songwriter competitions in which she routinely placed very highly. After 7 years of working in the Lithuanian TV and music industry, she set out to showcase her talents to the rest of the world.

In 2011, Donata moved to Turkey where she collaborated with well known Turkish music producer Erkan Tatoglu on a electro-rock style songs that she has performed with a live instrumental band.

Currently, Donata has just finished her English language EP “Revolution,” with the title song by the same name. She is releasing the single “Revolution” world wide in which the single will be accompanied by a professionally produced video clip. 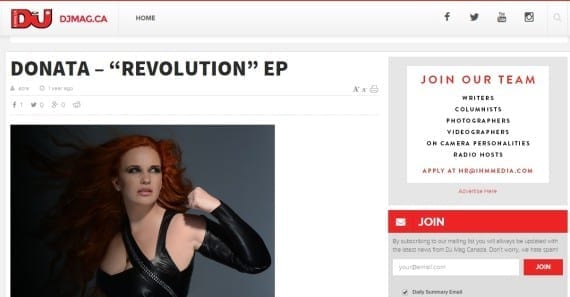