Prolific is moving the crowd with profound turntable routines, intricate lyrics and original tracks with a unique assortment of flavor from his self maintained imprint FOULPLAYRECORDS and affiliate artists and labels.

Prolific developed his tablist technique around such talent as Dj Klever, Immortal, Danny the
Wildchild, Shotgun (Formerly of Goody Mobb), SPS, and various other talents in the southeast.
His level of skill over time matured into a much more powerful force which led to many wins at local, regional, and national battles in the USA from the Dmc’s, guitar center, DMA magazine, and this past year he is coming off of his 3rd win defending his title yet again at CLUB LAVELA “the biggest night club in the USA” Prolific has shown his tablist skills are polished and ready for anyone in his way.

His hip hop project the “Nonstopkrooks” (Hiphop) for years saw prominence in the
underground hip hop scene. After years of focusing more on Electronic Projects Prolific has
decided to unsheathe the microphone and regain his respect as an Urban Action Figure. The
Nonstopkrooks albums features major artists like Goretex and Sabac formerly of Nonphixion,
Killah Priest of Wu-Tang, C-¬rayz Walz, Copywrite, and Butta Verses of de la soul.

Prolific’s sets are always smoking hot and he is infamous for rocking huge crowds all over the USA, Europe, and the Middle East. Prolific is officially endorsed by Rane, Urban Dwellar clothing, BBOYWORLD.com, Hiphopelements, and Madclout. He has worked for scratch academy, B.E.T., (Dj battle/host) NBC (Dj for Winter Tour) and various other major corporations which prove his talents and dedication to staying on top of his DJ skills, business demeanor, and ability to perform in any market or demographic.

Prolific has toured with some of the biggest names in EDM and hiphop, throughout his career. After years of battling all over the USA on the mic and decks Prolific started officially touring with various DNB and hip hop acts. In 2007 Prolific toured with GEIN (Butcher) for in Europe and the Middle East playing mega shows like Autopsy in Brighton to Cross Club in Czech Republic to name a few. Prolific is set to continue smashing dance floors and crowds on a worldwide basis. It’s not every day you see someone murder the decks with insane tablist skill only to pick up the mic and rock a live hip hop set. In ’08/09 Prolific toured the USA with Kosha Dillz, Butta Verses, and C-rayz Walz on three separate tours reclaiming the stage with his mic skills and battle routines. Also he shared the stage with Legends like Zardoinc, Dj Lord from public enemy, Treasure Fingers, Mayhem and many more! 2010 through 2012 Prolific has teamed up with the legendary producer and tablist RAW aka 6blocc and have been touring globally. Together they have toured the entire USA, Canada, Australia, Europe, Russia, Ukraine, and Belarus. Their live performance is only described as the most elite live show with the combination of live rap sets, turntablism, and all original dubstep tracks mixed with a hip hop flavor which are self-produced or unreleased. In 2013 and into 2014 Prolific continued to destroy crowds globally headlining major shows all over the USA and Europe. Also Prolific hosts a monthly in Destin, FL at Nightown which is the gulf coasts biggest and best venue rocking alongside Krewella, Cookie Monsta, Peg Board Nerds, Nerd Rage, 12th Planet, Bare, Crizzly, and other top bill talent.

Prolific is also the CEO of FOULPLAYRECORDS which releases a wide array of genres which
primarily consist of Drum and bass, Dubstep, Electro, Hip hop, and Tablist compositions. He has executively produced over 500 tracks and been featured on compositions with some very reputable names in hip hop and various genres in electronic music. Now his mission has become a reality, making FOULPLAYRECORDS a known name in the Drum and Bass, TABLIST, HIPHOP, Dubstep, Electro community on a global scale. With a stacked roster of elite forces, FOULPLAY more and more everyday is getting recognition for its accomplishments. From Klever the 2x DMC champ to the drum and bass producers like Raiden, Mayhem, Infiltrata, Gein, Mumblz, Prodigal Son, EmpireX, Spektrum. Dubstep producers such as Hulk, 6blocc, Trillbass, and 12th Planet who get love around the world Prolific’s hard work and team of musicians bring a sound and style that is as fresh as it gets. 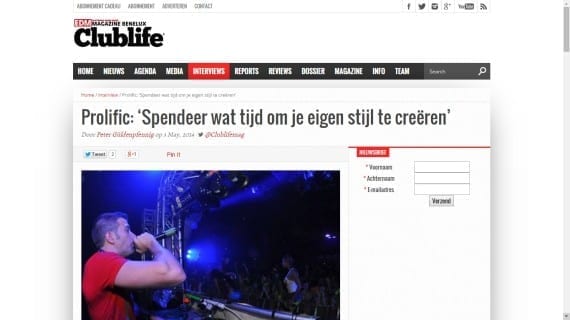