JOOP – You Can’t Start A Fire Without A Spark

Dutch DJ/producer JOOP kick started his career in 2001 as the winner of a national DJ contest by ID&T Events, arguably the biggest promoter in the world. In the following years, he was chosen to headline multiple festivals for them, including: Trance Energy, Innercity, Mysteryland and the world renowned Sensation festival. JOOP takes any crowd with ease and great enthusiasm. His powerful stage-presence is evident and mixing skills are beyond belief.

In 2002 he was handpicked by ID&T to mix the prestigious Trance Energy Compilation. Subsequently, his tracks Act Of God, The World, Another World and Sonsuz proved an international breakthrough and firmly established JOOP as a sought-after producer. JOOP’s The Future, Trance Energy’s massive 2007 anthem, proved legendary. Its success took JOOP on an ongoing world tour performing at all continents for crowds of massive proportions.

With one decade of solid success under his belt, JOOP created his own unique style which samples elements from multiple EDM genres. His sublime ear for melody and energy paved the way for 2012’s Just One Night, made in collaboration with top vocalist Tiffany Johnston. JOOP’s blistering bass lines combined with Johnston’s sweet and tender voice showed an instant triumph. Armin Van Buuren – the world’s number one DJ – personally lauded JOOP and supported the song in his famous radio show.

Inspired by the success, JOOP continues to amaze with new productions and tours. Tours through Asia, The States and his home country of Holland are on the agenda. JOOP – The Sound Of The Future. 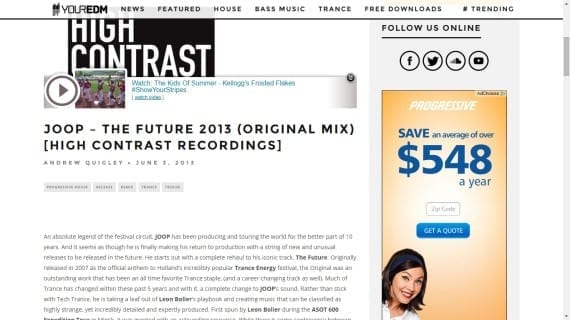