Twice the action, twice the noise, twice the party! After a couple of years of solo projects Artento Divini and Melvin Warning return to the scene with their own, fresh sound and rocking attitude. Their most successful release was 4LB (2006), which was played by Tiësto at Sensation White, used by Armin van Buuren at Dance Valley to start off his set with and played by Sander van Doorn on Holland’s biggest radio station Radio 538. Also ‘Chaib’ became a huge hit for Divini & Warning and so the story began. 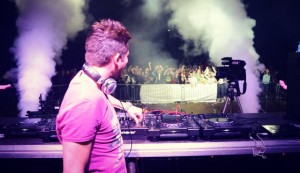 In 2012 they reunited and BAM!, more charthitting tracks followed. Just a Sound and The Housebeat placed themselves right in the top of the leading download charts and with this revival, Divini & Warning also make a comeback to the stages after their first performance in years at Ultrasonic Festival. They give only one warning: “Our sounds are divine!”